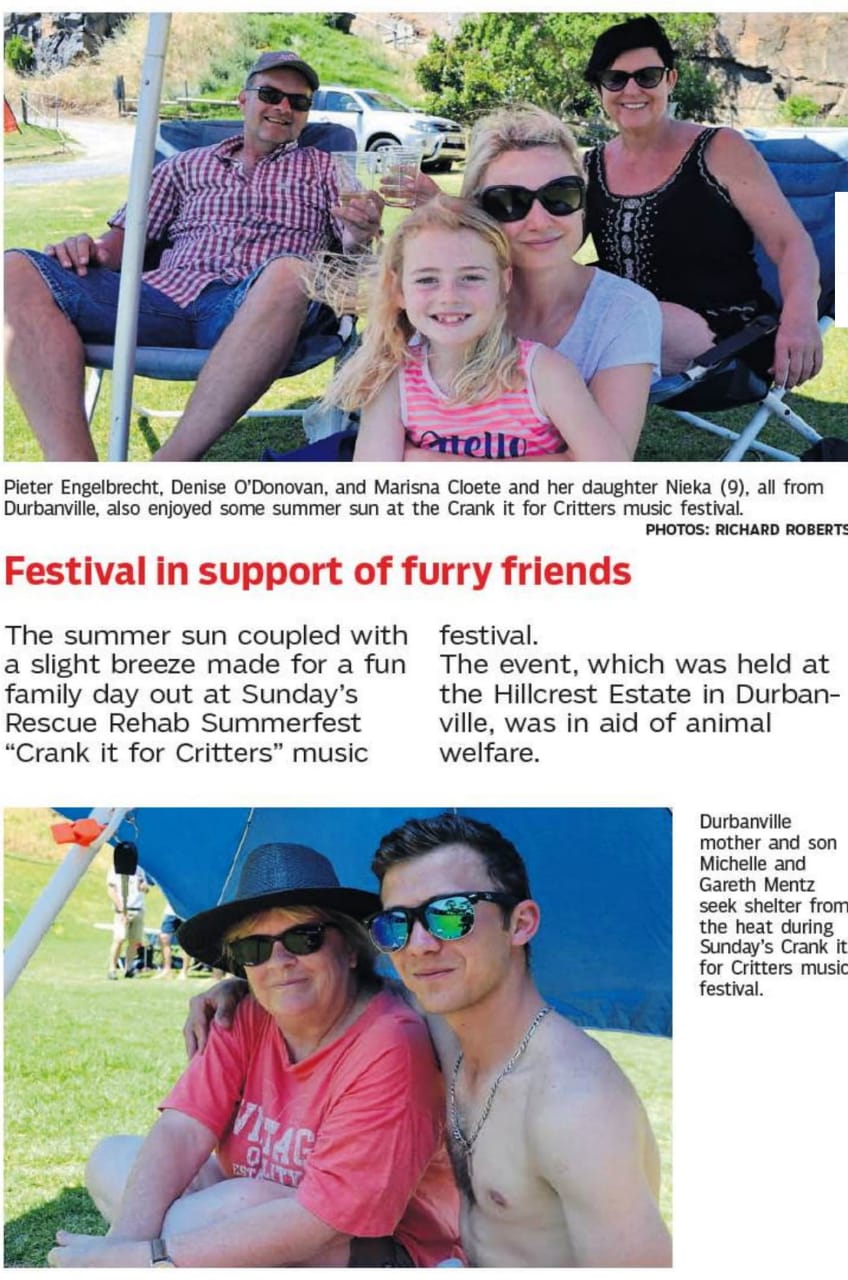 A testimonial shared; “If you missed this, you missed out!” Truer words were never spoken. Become part of the Badger Nation and join us next time.

This event was to raise funds for abused, neglected and abandoned animals throughout South Africa and Rescue Rehab SA’s biggest held yet. Hillcrest Quarry provided the perfect outdoor setting on this day. Cape Town’s talent featured Slow Brew’d, Joe Public, Gareth James, The Sweet Resistance and The Rudimentals. Each phenomenal performance of various genres left spectators spoilt for choice. Rave reviews after the show confirming the talent of the bands and energy that they brought to the stage! Thundabird Studios provided world-class quality, clarity sound and compliments poured in from band members and audience!

Rescue Rehab SA, with their fantastic sponsors being Lionel’s Choice Dog Food, Lewis Group, Doodles Restaurant, ReMax De Kloof and Afritech, pulled out all the stops, offering a magical fun day out for family and friends alike. A large jumping castle, glitter face and body painting and the quarry opened for swimming was ideal for children and parents to cool off in the heat. Compliments to the three young representatives from Big Bay Lifesaving Club that ensured the water waders were safe. Thank you Bhejane Special Events for the professional Medic and Security on duty. To all, your stellar level of enthusiasm and professionalism ensured a successful event.

Two prize draws, to the value of R10 000, included a Luxury Lodge Stay for two at Aquila Game Reserve and a Ukulele guitar, with compliments from Mars Music. The winner of the main prize is likely still in front of the main stage as he turned out to be an avid rock and reggae supporter! The caterers delivered beyond expectation! Food offering included vegan options like activated charcoal and lentil burgers, delicious gluten-free deserts and rice paper salad rolls.

Lionel’s Choice offered a promotion, selling their dog-food with a portion of funds donated to RRSA, and also donated bags of food for RRSA’s distribution. Welfare in South Africa is in dire need of public support. We appeal to all animal lovers to join forces with Rescue Rehab SA, as we endeavour to assist Animal Welfare Organisation’s with the immense task at hand to reduce and reverse the effects of animal cruelty in South Africa with their extreme hard work in the field and in their care.

The colourful gazebos, glitter sparkle on arms and legs, kids doing cartwheels across the lawn, the joy of jumping castle fun, picnic blankets, and of course, the old time rockers in the golden circle, was a memorable sight that we will never forget! We would be remiss not to mention RRSA’s inflatable, still nameless Pink Flamingo whose head was bopping up and down in the quarry water as concertgoers floated away to the music. No words could do the day justice.

Join us via www.rrsa.org.za to link to all our social platforms.